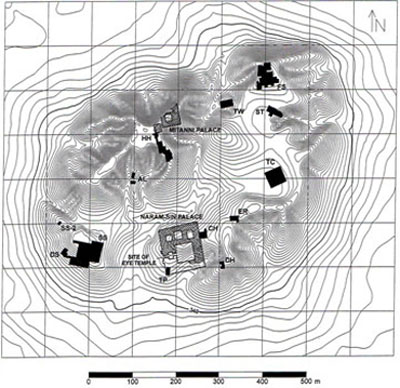 The earliest levels excavated so far date to the mid-5th millennium BC (Late ‘Ubaid and Late Chalcolithic 1) in Area CH. These levels, to be published in Brak Vol. 3 (forthcoming), had been much disturbed by the construction of later monumental buildings. However, the evidence suggests that there were monumental buildings in this area at least as early as the end of the Ubaid Period.

Better-preserved evidence for the early city has been found in Area TW, where an uninterrupted sequence from the late 5th (LC2) to the early 3rd millennium BC has been excavated. This sequence of occupation includes unparalleled monumental buildings of late 5th and early 4th millennia BC date (LC2) followed by evidence for a south Mesopotamian Late Uruk colony.

An industrial area adjacent to the late 5th millennium BC monumental building is one focus of the current research programme. Material of the 4th millennium BC has also been identified on the Area HS ridge, and much of the 90-hectare Outer Town (outside the limits of the tell itself) is first occupied at this time.

Undoubtedly the best-known building of this date is the Eye Temple, excavated by Mallowan in the 1930s. Our recent excavations now enable us to date more precisely the original version of this building to the first half of the 4th millennium BC.

Together, the evidence for large size, religious and secular authorities, and economic complexity imply that Brak was a city by the early 4th millennium BC, or c 3800 BC. 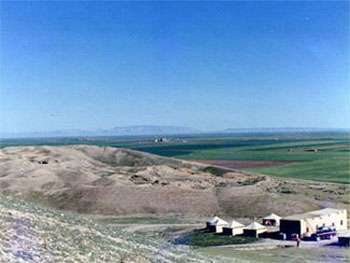 Area of Naram-Sin Palace, seen from Area HH, with Jebel Sinjar and its western pass in the distance.

Brak remained urban in size and complexity during the 3rd millennium BC but retracted back to the limits of the main central mound. Houses belonging to the 3rd millennium city have been excavated on both northern (Area HS) and southern (Area CH) portions of the tell. And in 1999-2004, part of a large public building was investigated in Area TC.

Of particular importance for the late 3rd millennium Akkadian Period was Mallowan’s excavation of the ‘Palace’ (actually a fortified storehouse) of Naram-Sin, a grandson of Sargon of Agade. This building provided the first known evidence for South Mesopotamian control in the area. During the 1980s-90s, further important early Akkadian Period buildings were investigated, including a unique audience hall and temple together with administrative and ‘industrial’ areas near the Naram-Sin Palace (Area SS), and a temple and possible ‘way station’ near the north gate of the city (Area FS). Cuneiform tablets and sealed bullae from these buildings tell us something of the Akkadian and later administration.

Of significance is the evidence for more or less continuous occupation throughout the 3rd millennium BC, including an apparently Hurrian rebuilding of the Naram-Sin building, squatter occupation in Area SS, and further use of the site’s northern ridge. Evidence from Tell Leilan suggests abrupt climate change and an abandonment of that site and adjustments to the settlement pattern across the region, but the inhabitants of Brak proved more resilient or adaptable. 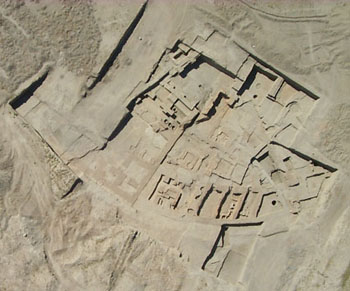 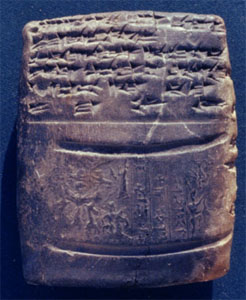 Reverse of a legal document sworn in the presence of the Mitanni king Tušratta, one of the royal participants in the famous Amarna correspondence (14th century BC).

Around 1950 BC, there was a change in occupation at the site and in the Upper Khabur region, apparently coinciding with the settlement of recently-arrived tribal Amorites. This new phase was signaled archaeologically by the presence of so-called Khabur ware, a painted pottery type first found (and named) by Mallowan. Occupation on the mound at Brak was limited at this time, reduced to the northern part of the tell which, as a result, has become its highest part.

The site remained relatively small and restricted to the northern ridge during the later 2nd millennium BC Mitanni Period, although a supplemental ‘suburb’ developed in the northern Outer Town. Mallowan excavated Mitanni houses in Area HH, and in the late 1980s David Oates excavated the Mitanni Palace and adjacent temple.

Further houses of Old Babylonian through Mitanni date were exposed during 2006-2011. The town landscape and material culture of the terminal 3rd through 2nd millennia BC is a current focus of research at the site. This project includes investigation of the little-understood transition from Early to Middle Bronze (c. 1950 BC), marked in the region by settlement pattern change and possible environmental breakdown. It also comprises exploration of the continuity of domestic space use on the site during the political shifts from the territorial state of Samsi-Addu through its collapse and the imposition of the Mitanni state. The latest surviving occupation on the main tell is of Middle Assyrian date.

1st Millennium BC and later

The final settlement of Brak, including Roman and early Islamic, is found largely in the Outer Town, though there may have been a Late Assyrian temple on the north part of the tell, as suggested by the recovery of two Late Assyrian baked clay ‘hands of Ishtar’.