Research at Tell Brak since the late 1990s has revealed that the site is urban in scale and economic complexity from the early 4th millennium BC, contemporary with, or even slightly earlier than, the better-known early cities of southern Mesopotamia, such as Uruk.

The earliest levels so far excavated date to the mid-fifth millennium BC (Late ‘Ubaid and LC1, Area CH). These levels, to be published in Brak Vol. 3 (forthcoming), include monumental buildings dating to at least as early as the end of the Ubaid Period. 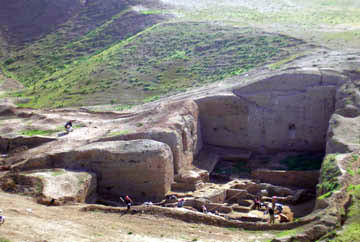 View of Area TW from the west.

Better-preserved evidence for the 5th-4th millennium cities comes from Area TW, excavated from 1997-2011. This includes unparalleled monumental buildings of late 5th and early 4th millennia date (LC2), succeeded by evidence for a south Mesopotamian Late Uruk colony. The upper levels in Area TW include examples of Jemdet Nasr pottery, indicating continuing contact with southern Mesopotamia after the Late Uruk ‘abandonment’ of the region.

(For more information on TW Levels 21 through 19, see the current research page.) 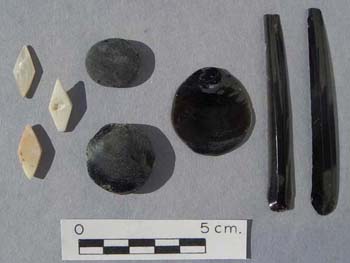 The most important building in TW is a Level 20 monumental structure, dated to the late 5th millennium BC (Late Chalcolithic 2, the “Basalt Threshold Building”). Owing to its limited exposure, the building’s function is unclear, but its scale, careful construction, and clean floors imply that it was an administrative building of some importance.

The area exposed of this building comprises the fore-court, entrance and parts of two rooms. It has a massive basalt threshold measuring 1.85 x 1.52 m and 29 cm thick. No comparable building has as yet been found elsewhere. A fore-court with sequential white plastering layers lies to its north, and in the final phase of use, a row of small rooms was built against its northern façade.

An industrial area lies to its west, comprising a complex of rooms with at least four sub-phases of alteration and adaptation. Features include large ovens, bins and evidence for manufacture of flint and obsidian tools and decorative objects of obsidian and shell. A street further west connects this area to the north entrance of Brak. 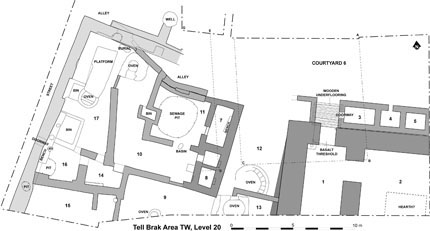 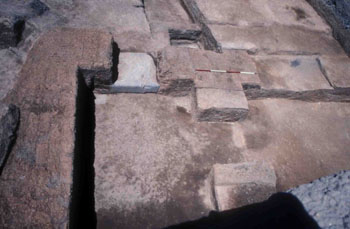 The Level 20 Building, shown in the lower right of the plan to left. 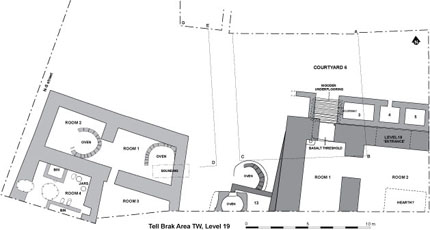 The monumental building of Level 20 continued in use in the following level, and the industrial complex of Level 20 was succeeded by a more imposing–but similarly industrial– building in Level 19 (LC 2-3). Its walls were over a metre wide, and its four rooms contained large ovens, bins and grain-grinding features. Clusters of spindle whorls, grinding-stones, a sack of sling bullets abandoned in a corner, flint and obsidian tools and objects, and both unworked shells and mother-of-pearl inlay testify to the range of manufacturing that took place there.

Stamp-impressed clay sealings from containers (jars and baskets) imply a tiered hierarchy of economic control was at work in this area, while seal imagery of lions is reminiscent of Mesopotamian royal symbols from the Late Uruk through Neo-Assyrian Periods.

Early in the 4th millennium BC, another public building was constructed. This consisted of a formal, tripartite building together with a large courtyard, with ornamentally niched walls. In this were a variety of ovens which may have served for the cooking of large quantities of meat. This complex was situated next to a street leading from the nearby north entrance of the settlement (the same street persisted from Level 21), and the complex remained in use for a considerable period of time (Levels 18-14, LC 3).

To the east of and contemporary with this ‘roadside steak-house’ were several levels of houses, from which were recovered large quantities of faunal and botanical data, in particular from Level 16, which seems to have suffered a major destruction. It was in this level and Level 17 that objects of early 'Eye Temple type' were discovered in situ, allowing us to re-date Mallowan’s temple sequence to a period earlier than had previously been suspected.

During this period (Middle Northern Uruk or LC3), we see the use of increasingly complex recording devices, including two small dockets apparently recording a number and a pictograph of a type of animal. A large numerical tablet was also found.

A hoard of c 3600 gold, silver, carnelian, amethyst, rock crystal and other stone beads was found beneath the floor of a Level 16 courtyard. 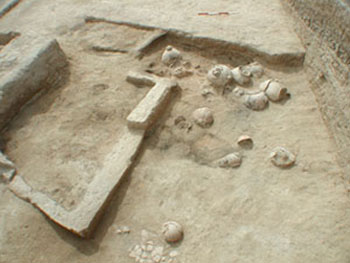 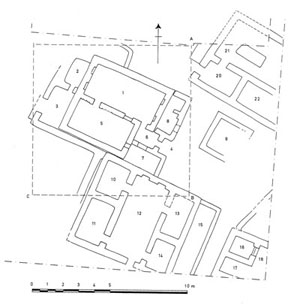 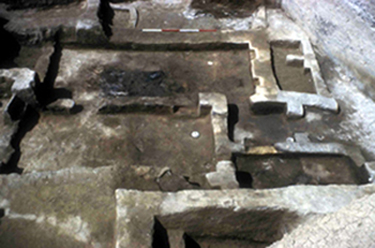 Level 16 buildings, rooms 1 and 5-8 in the centre of the plan opposite. 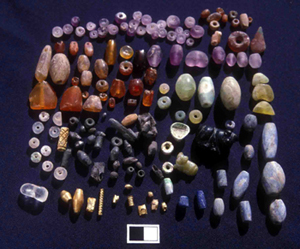 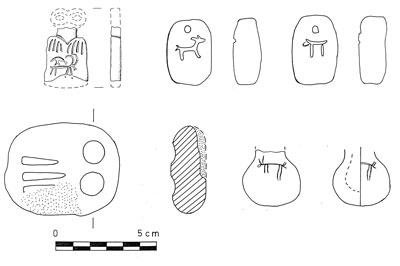 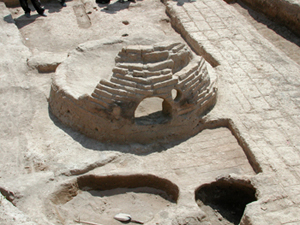 One of the many ovens associated with the Level 18 Building (photo: David Thomas).

In Level 14, this area of the settlement was levelled and rebuilt, although the continuity of pottery types suggests little if any change in the population itself. In the succeeding Level 13 (LC 4), however, South Mesopotamian Middle Uruk pottery and other artefacts appear for the first time. 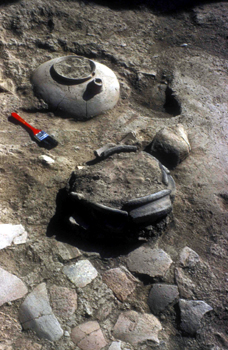 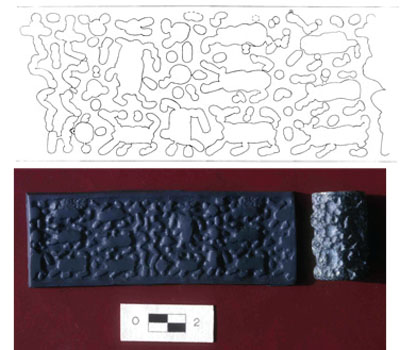 In Level 12, this area of the site was again levelled and rebuilt. In this and the succeeding level, the archaeological materials recovered were entirely of Southern Late Uruk types. We believe that Brak was a true southern Mesopotamian colony at this time, and evidence for metal- and flint-working reflects at least two of the local products desired by the new inhabitants of the site. It is clear also that wool was an important product, and the proportion of sheep/goat rises to as much as 90% of the faunal material at this time.

Part of a large house was excavated, of which room 6 (centre) was a flint-knapping area. Rooms 1-3 (on the west) may have been a row of shops or work-rooms. The pipe drain at the south comes from an unknown structure further to the east. 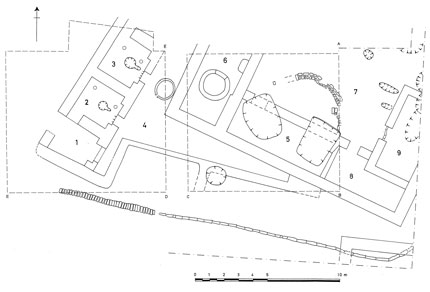 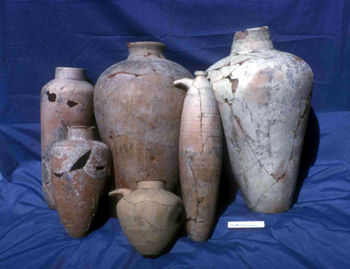 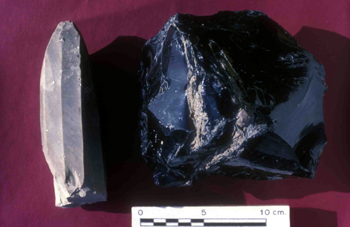 Large Canaanean blade cores, the blades themselves and raw obsidian were found in Room 6; this lump of obsidian weighed over 2 kg. 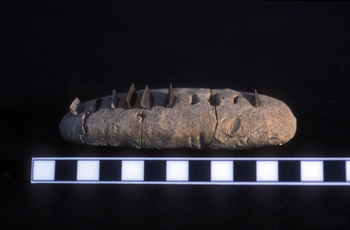 This clay microblade-holder from a Late Uruk house proves that small microlithic blades were still being manufactured at this time.