As one of the largest ancient mounds in northern Mesopotamia, Tell Brak has long drawn the interest of explorers and archaeologists.

Fr Antoine Poidebard, a pioneer in aerial photography, included Tell Brak in his early biplane reconnaissance of the region, exploring the Roman limes and irrigation systems. During 1928, he made extensive soundings into the Roman castellum at the northeast edge of Brak’s Outer Town. 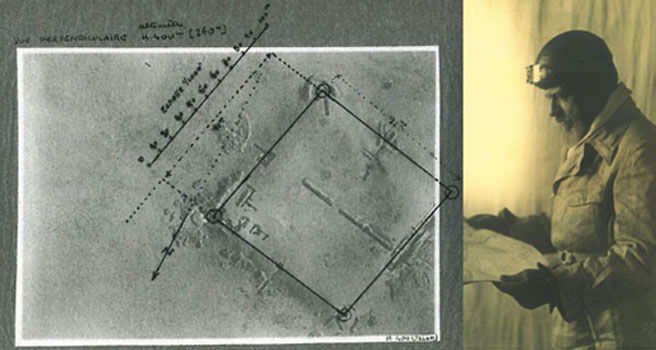 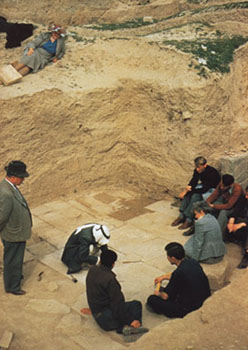 Poidebard was followed by Max Mallowan, who selected Brak and the neighbouring sites of Chagar Bazar, Tell Arbid and Gir Mayr after a survey of the Upper Khabur region.

Mallowan’s primary discoveries were the “Eye Temple” of the 4th millennium BC, with its deposits of hundreds of small stone “idols”, and the “Naram-Sin Palace”, which proved the presence of southern Mesopotamian political power in the north during the late 3rd millennium BC. 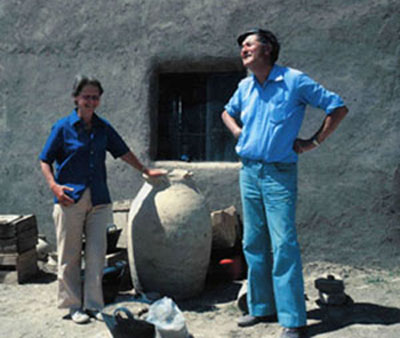 Excavations were resumed in 1976 by David and Joan Oates. The first objective of the project was to establish an archaeological and chronological framework within which to examine changing environmental, social and economic conditions in the 3rd millennium BC. Among the topics investigated were the nature of the Akkadian ‘imperial’ presence at the site, until then known only through Mallowan’s Naram-Sin Palace and associated cuneiform documents.

The project also explored the earlier independent and powerful kingdom of Nagar, which is attested in cuneiform tablets from Ebla and controlled an area at least as distant as Tell Beydar.

The excavations also provided key evidence for continued occupation during the Post-Akkadian Period, when the site was almost certainly a town within the earliest known Hurrian kingdom, also represented by Tell Mozan to its north. The continued occupation is particularly relevant to current environmental debates and reconstructions of settlement pattern collapse in the terminal 3rd millennium BC.

The project also expanded well beyond its initial 3rd millennium BC focus. In 1985-7, a late 2nd millennium BC Mitanni Palace and Temple were excavated on the highest part of the tell, providing rare evidence of Mitanni occupation and political power within its ‘homeland’. The first soundings into the late 5th-4th millennium BC levels were also undertaken (Areas CH and TW).

In 1994-96 Roger Matthews was responsible for a Leverhulme-funded project devoted to detailed contextual analysis. From 1998 to 2004, Geoff Emberling continued the 4th millennium BC early urban excavations, together with further investigation of the mid-3rd millennium BC city administration (Area TC); Helen McDonald also served as Field Director in 2000-2004. 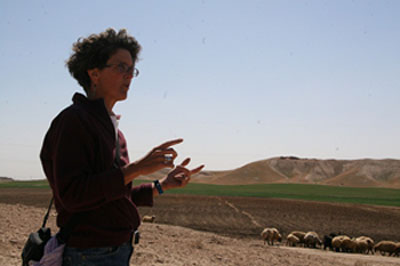 The growth and sustainability of the early city during the late 5th –early 4th millennium BC have been the major foci of the most recent research, under the Field Direction of Augusta McMahon. Late 4th-early 5th millennium BC socio-economic complexity is reflected in industrial activities in the lowest levels of Area TW. We have also exposed four unique mass graves of the early 4th millennium BC within one of the small mounds defining the limits of Brak's Outer Town (Tell Majnuna). These graves, the result of violent conflict or early warfare contemporary with the intensification of urbanism at the site, reflect the negative aspects of urbanism, including vertical hierarchies of wealth and power and internal social stress. The graves were located in a vast rubbish pile, testament to the logistic difficulties faced by the city’s residents. Further excavations in Tell T2, a small mound at Brak’s southeast edge, have revealed further industrial activities and burials that reflect the shifting use of the peri-urban zone.

These recent excavations have also examined household archaeology and cultural continuities and discontinuities across episodes of environmental and political change from the terminal 3rd millennium through the later 2nd millennium BC. 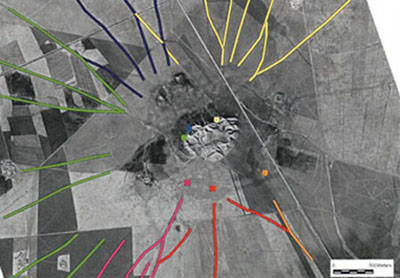 CORONA image of hollow ways by Jason Ur

From 2002 to 2006, an intensive survey of the Brak Sustaining Area (with a radius of 20 km from Brak) was undertaken, with Henry Wright as Field Director. Based on satellite imagery and on-groudn sherd collection, some 550 sites from Neolithic to Islamic date have been identified and recorded.

An intensive field-walking survey of the immediate environs of Brak itself (the Suburban Survey), carried out by Jason Ur and Philip Karsgaard, has further extended our knowledge of the outer city at Brak and its cycles of occupation from ‘Ubaid to early Islamic times.