Tell Brak was occupied continuously from the ‘Old Babylonian” (Old Jezirah) Period through the Mitanni and into the Middle Assyrian Period. It remained relatively small–c 10-15 ha–during the early 2nd millennium BC, with occupation only on the high ridge at the north edge of the main mound. The Mitanni Period occupation also was focussed on this high ridge, but there was an additional lower town just north of the main mound during this period. 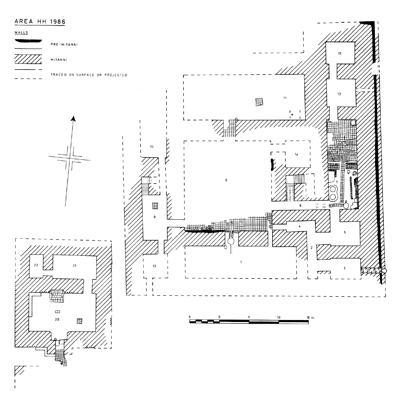 Undoubtedly the most important 2nd millennium BC complex found on the site is the Mitanni Palace and Temple. This complex is located at the highest point on the mound and was constructed of a distinctive red mud-brick.

The palace was built on the same principle as the roughly contemporary palace at Alalakh, with living quarters on an upper floor, reached by staircases still preserved to a considerable height. This building followed a typical LBA palace ideal in incorporating specialist workshops, where a number of glass ingots were found, together with copper and iron slags and evidence for the manufacture of ivory objects (including the use of both hippopotamus and elephant ivory).

An area of houses just to the west of the Mitanni palace, dating to the Old Babylonian through Mitanni Periods, is one focus of the 2006-2011 research programme, which investigated cultural continuities and discontinuities during major environmental and political changes in the region. 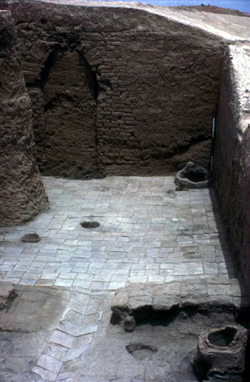 The intact doorway at the north end of the workshop stands 3.5m tall. 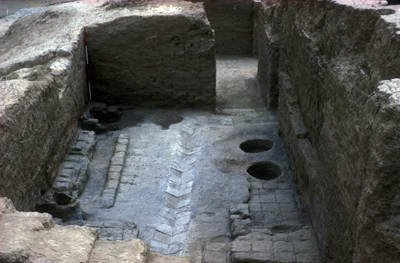 The largest workshop in the Mitanni Palace, with a paved floor at one end and ovens and a drain at the other.

Glass ingots were found in the storeroom south of the workshop and, nearby, evidence of metal working, both copper and iron.